Talking About Events in Ferguson? Some Useful Distinctions

There are all kinds of conversations going on right now about the shooting of 18-year-old Michael Brown, another young African-American male in Ferguson, Missouri last week. Most of us are quite familiar with the story by now, and are outraged by another incident in the U.S. involving the use of lethal force by law enforcement against unarmed teenagers, particularly those who are black. And if we aren’t outraged, I think that we should be.

These conversations are more difficult to navigate when certain important distinctions are not made clearly. We can see this problem in the news media in which the third person reporting of relevant facts to the public immediately becomes conflated with the social and political views of the news station and host.

Check out this clip of Sean Hannity where he challenges his African-American politician guest, Patricia Bynes, and her concerns about racism and racial profiling.

Hannity asserts that she can make no claims about race bias on the part of the police because she has an incomplete understanding of the facts; that is, what actually happened in the encounter between Michael Brown and the police.

It is obvious that Hannity doesn’t have a genuine interest in clarifying the facts for his audience; rather, he uses the ambiguity of the third person perspective to simply discount his guest’s assertions regarding the police’s targeting of blacks, as well as their excessive use of force. While the explicit purpose of this interview is to gain a perspective on the racism in this story, the implicit purpose is to discredit his guest and her views on the problems of race.

It might have been helpful for Ms. Byrnes to simply make the distinction that addressing racism as a persistent social problem doesn’t depend on a thorough understanding of the precise sequence of events in this particular case. As integral thinkers, we may recognize Hannity’s decision to appropriate a broad conversation about the interior of culture and its impacts on behavior into the specific “right-hand quadrant” discussion of the facts of this incident.

In this clip, we observe three topics swirling about: the facts about this particular shooting and death, the pernicious problem of racism and racial profiling, and the excessive use of force by law enforcement. All three topics are often discussed in these conversations, but they are collapsed, and they need to be pulled apart.

In Utah, in August of 2014, a 20-year-old unarmed white male, Dillon Taylor, was gunned down by police, again outside a convenience store. The protests which took place in Salt Lake City did not include the focus on racism, but people were terribly upset about what they see as the militarization of local police. Below is a photo from a Salt Lake City newspaper regarding this very real problem.

The concern here is that the mentality of law enforcement has changed so much that the public has become the enemy. This change in the interior cultural of policing is mirrored in they way are equipped, armed, and trained. It is as if they are going to war which results in far more shootings and deaths. Local law enforcement is viewed by federal agencies as the front line on the War on Terror and the War on Drugs, and this is what is at the root of the problem. 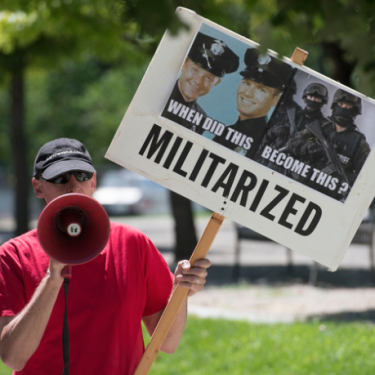 Utah has its own problems with racial profiling and unfair treatment of people of color by the criminal justice system, including increasingly violent reactions on the part of police. But for the sake of conversation, it is very helpful to distinguish concerns about racism from concerns about excessive use of force because the conversation can be guided to more purposeful conclusions than when they are conflated.

In other words, once we have established what is being reported to have actually happened, i.e. “the facts conversation,” we can then talk about our feelings of anger, loss, and sadness over this young man’s death, the all-important emotional dimension that should be included in any in-depth discussion.

From there, we can then discuss the persistent problems and challenges of race in this country, including the pain and outrage we feel and share, including drawing on our different first person experiences. From there, we might even be inclined to pose suggestions about how to continue to address these issues responsibly and consciously, so that we don’t end the conversation by drifting into an aimless sense that we are powerless to change culture.

If we are able to make these distinctions, we can then address this question regarding the actions of the police, their use of force, and the changing culture of law enforcement. How does each of us see this? What is true in our own experience of the places we live? “How would we imagine healthy law enforcement would act?”

Finally, if it is a true Integral conversation, we could turn our thoughts to law enforcement officers themselves, and talk about how to ensure the safety of our police. We could purposefully recognize the essential contribution that police make to a healthy social order and to the stability needed for the rule of law in the United States. The protections offered by the justice system in this country are a privilege that many in the other places world do not begin to enjoy in their daily life.

In my best of all possible conversations, I would want to acknowledge the good faith of our police, and the pain that is experienced by the police as a whole over an incident of this kind. They must be included in our circle of care and concern for the conversation to be complete.

Author, Everything is Workable, a Zen Approach to Conflict Resolution.

6 thoughts on “Talking About Events in Ferguson? Some Useful Distinctions”